When I bought GC, I thought I would only be using it for RPGs. But I was playing an old Infocom text adventure recently and I started by mapping it out on paper. Then I realized that I did purchase GC and wondered if I could just map it out there instead. Turns out, it worked out very well. Here is a screenshot of one way to map out these types of games in GC. (You can click on the image to zoom in a bit) --->

I just have one request. In the upper left hand corner of the overlay, I made heavy use of the two way 'Arrow Left+Right' and 'Arrow Up+Down' arrows. If a two way 'Arrow NW+SE' and an 'Arrow NE+SW' could be added at some point, I would definitely use them as I plan on playing more of these types games in the future and I will be mapping them out now in GC.

Hey, that's a cool use for GC! I've added two new bi-directional diagonal arrows. They'll be in the next update. 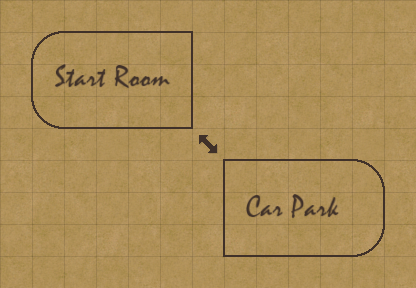 That looks great. Thank you for the pic showing it.

This looks really good, I have been looking into MUD mapping software that is able to label and customize arrow paths like this. Do you have more examples of this type of map in GC4? If you need to add new rooms, can you easily multi-select a set of rooms and move them all as a block?

Yes you can use the box select tool and then the move tool to quickly move areas of the map around and reposition boxes (or whatever you've drawn).

Full disclosure - there's probably a few things I'd add to make this a better MUD map program. Right now you have to draw boxes yourself out of edge tiles. It's quick to do, but it's not like a resizable box you might expect in a dedicated tool. Additionally there isn't current support for long vector lines from arbitrary point A to point B - it's all still tile based, so you'll have to draw a lot of tiles to make slightly inflexible lines as MikeSol has done.

Thank you, that info helps a lot. Is it easy to copy/paste boxes once drawn? Can a box be saved as a template to re-use?

Most of the dedicated mud mapping programs I have looked at make certain assumptions about how the zones and directions work and struggle to map areas that don't follow those rules. Most also don't allow for labels and other info. I have looked into SVG mapping, but I really like the grid aspect that GC4 offers.

Yes you can copy/paste boxes no problem. However, In the current version you can't copy text objects but I'll be adding that in soon. Right now you have to move the box then move the text as two separate actions - not ideal atm but I'll work on it.

There aren't formally templates, but you could fake it by having a second region (the tabs at the bottom) and pasting what you need in there and copying back out of there as you need. Hope that makes sense. Again lack of text object copy/paste will make this annoying atm. but stay tuned to a future update with that implemented.

Just posting here to make it clear that since v4.3.2 you can select text objects using the standard selection tools (marquee, wand tool, etc.) and move them around and do cut/copy/paste actions too.

David Walters wrote: ↑
Mar 20, 2019 11:41
Just posting here to make it clear that since v4.3.2 you can select text objects using the standard selection tools (marquee, wand tool, etc.) and move them around and do cut/copy/paste actions too.

with this options you can make an extra layer only for following an interactive campaign story of yours and dont loose track where your tabletop rpg party is right now or was in the last session. this kind of interacting text is realy needed in tabletop rpg sessions.
POST REPLY
9 posts
Forums
General Discussion
Back
Grid Cartographer, not just for CRPGs